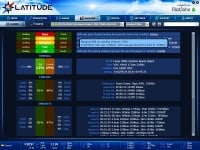 While some pilots immediately earn money with any aircraft, most lose a lot. This is a matter of simply biting off too much too soon, or not being prepared for the realities of aircraft “ownership”. There are also pilots that are not interested in planning flights in such detail, or are restricted by other external requirements that limit what they can achieve monetarily. To alleviate the losses from some of these scenarios, the economy component of Latitude is optional for all pilots.

In order for a pilot to earn money on a given flight, he or she will have to own the aircraft they’re flying. Aircraft will be purchased using virtual currency, and all flights with the purchased aircraft livery will participate in the economy as they would now. However, if a pilot flies an aircraft that is not owned, the flight will be judged only on skill and comfort, and reputation when uploaded. This removes the possibility of losing large amounts of money when flying unprepared or with less than ideal configuration.

As you progress from Student to Private to Airline Pilot, you are able to purchase Small to Large Utility to Transport aircraft on credit respectively. This allows you to try to “stay in the black” as you build your career and finances. Those pilots that have no interest in flying smaller airplanes to build their balance sheet will be able to purchase their favorite aircraft on credit (e.g. PMDG 738 NGX United Airlines N9876) after obtaining a type rating on the aircraft model (to demonstrate adequate practice).

Type ratings are achieved on aircraft models (e.g. PMDG 738 NGX) by flying a specific number of flights AND hours. To obtain a rating for a given aircraft model, pilots will need 30 flights AND 30 hours in the model. Once a type rating is granted, aircraft liveries of the given model can purchased on credit regardless of the aircraft family or pilot ranking.

To facilitate this transition, and to benefit both pilots with positive and negative earnings, the current earnings for both flights and pilots is now modified. Pilots with positive earnings will keep their total, and will immediately be able to purchase aircraft. Pilots with negative earnings will have their debt wiped out, thus allowing them to start fresh without losing any time or career advancement. All flight earnings will be removed to show 0$ (since you did not own the aircraft at the time of the flight). Lastly, type rating eligibility will be calculated based on your current flight history.

These changes ensure that newcomers don’t build up a large debt by forcing them to start small, while not restricting experienced pilots from using their favorite aircraft, requiring only that they prove their eligibility to fly large complex aircraft for commercial revenue purposes.”