[20JUL17] Something for people who LOVE airplanes and flying…

For tonight, I am going to take a break from the constant work and announcements related to product conversions for Prepar3D v4, and instead focus on something new and truly incredible from the development team here at PMDG- namely our upcoming new product release, the PMDG DC-6 Cloudmaster for FSX, FSX-SE, Prepar3D v3 and Prepar3D v4.

We are planning to turn her over to you later today, and we wanted to give you a really nice look at what you are getting! 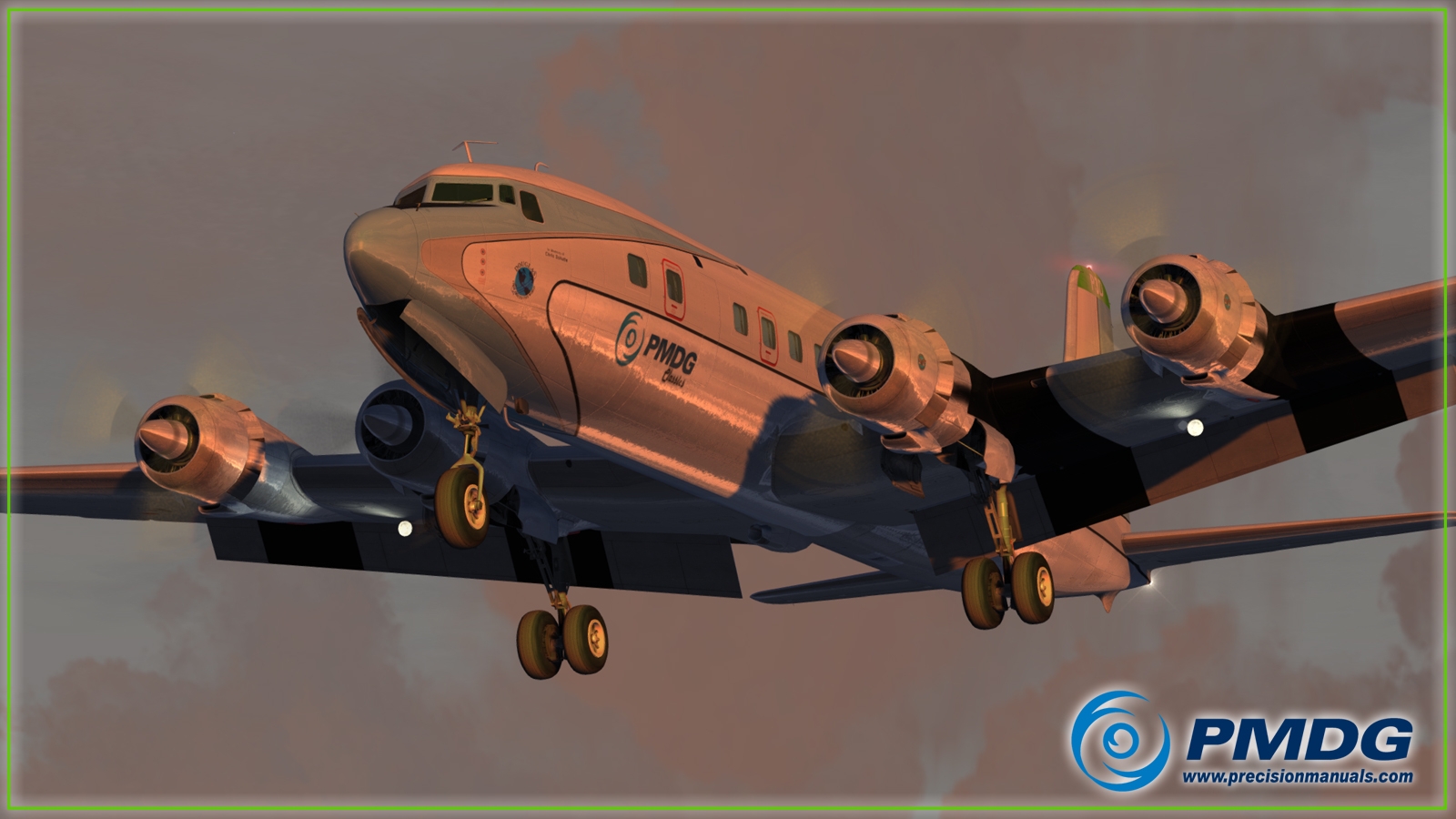 This product was announced nearly five years ago, and began it’s development life as a project for FSX.  A short time later, we elected to completely reset development, instead using the DC-6 as a development sandbox to teach ourselves a strategy for releasing products into XPlane.  That product released a year ago, and conversion work commenced to bring the product back to our roots in the FSX and Prepar3D platforms- also turning our attention to expanding our existing physics models to includes some aspects that we have not previously modeled, such as all of the various factors involved in the production of flight by use of radial engines.

Okay, so like everything else PMDG, it took on a life of it’s own and took five times longer than it should have, but in order to be a part of the PMDG team you have to afflicted with the “but I can make this more realistic” bug…  and the team of Chris, Henning, Vin and Jason certainly have a good case of this infection. 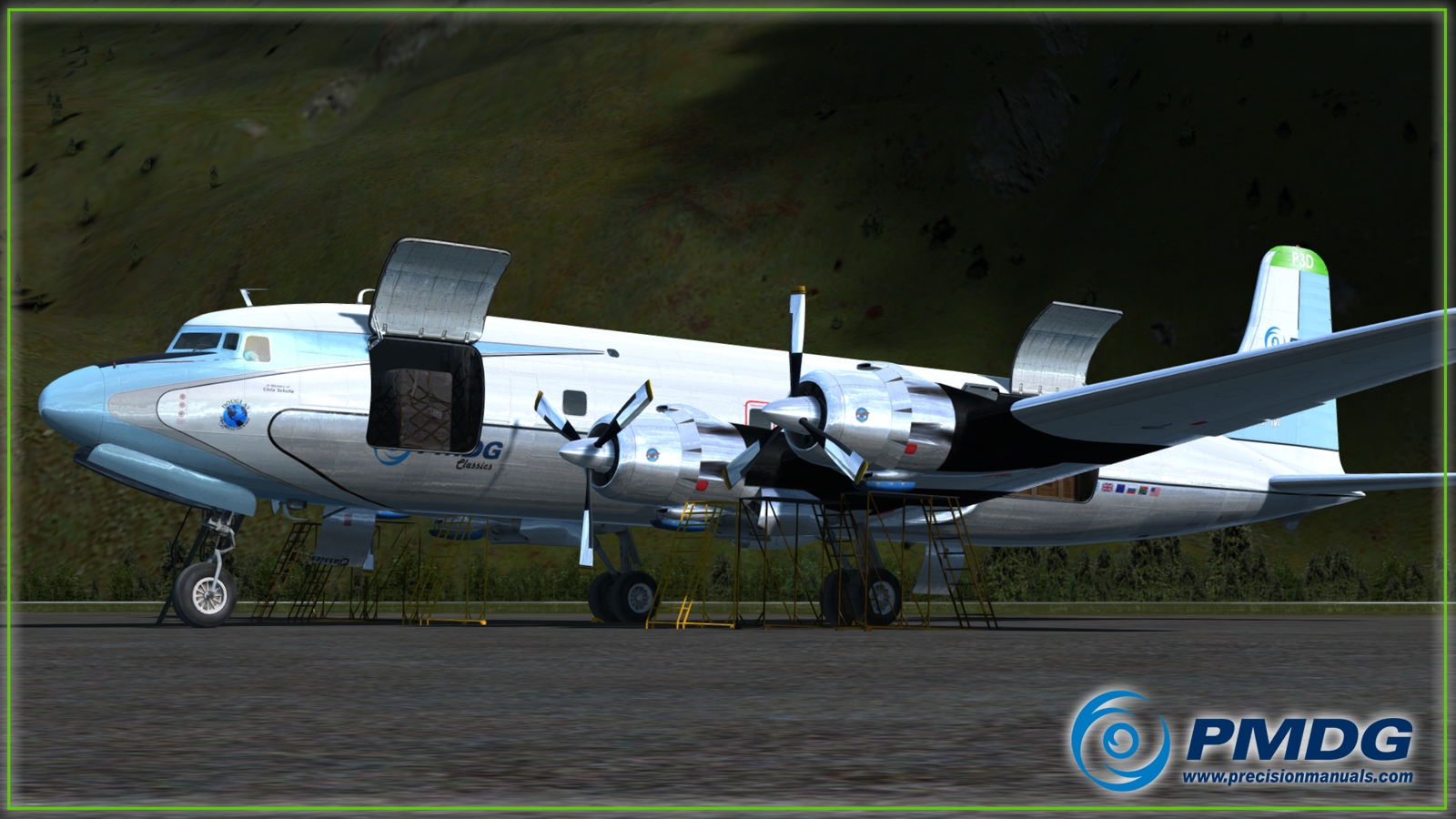 What has resulted is an incredibly detail rich simulation that brings an entirely new aspect of flying to the forefront.  Simmers who have even a passing interest in the history of modern airline travel will lap up the thousands of tiny details we have included in this product.  Where a modern airliner is mostly about managing navigation, flying a classic propliner like the DC-6 is about managing the engines.  Mismanage a cowl flap setting, fuel flow, oil pressure or the RPM/Manifold pressure settings, and you could ruin what should be a very reliable set of machines strapped to your wings. 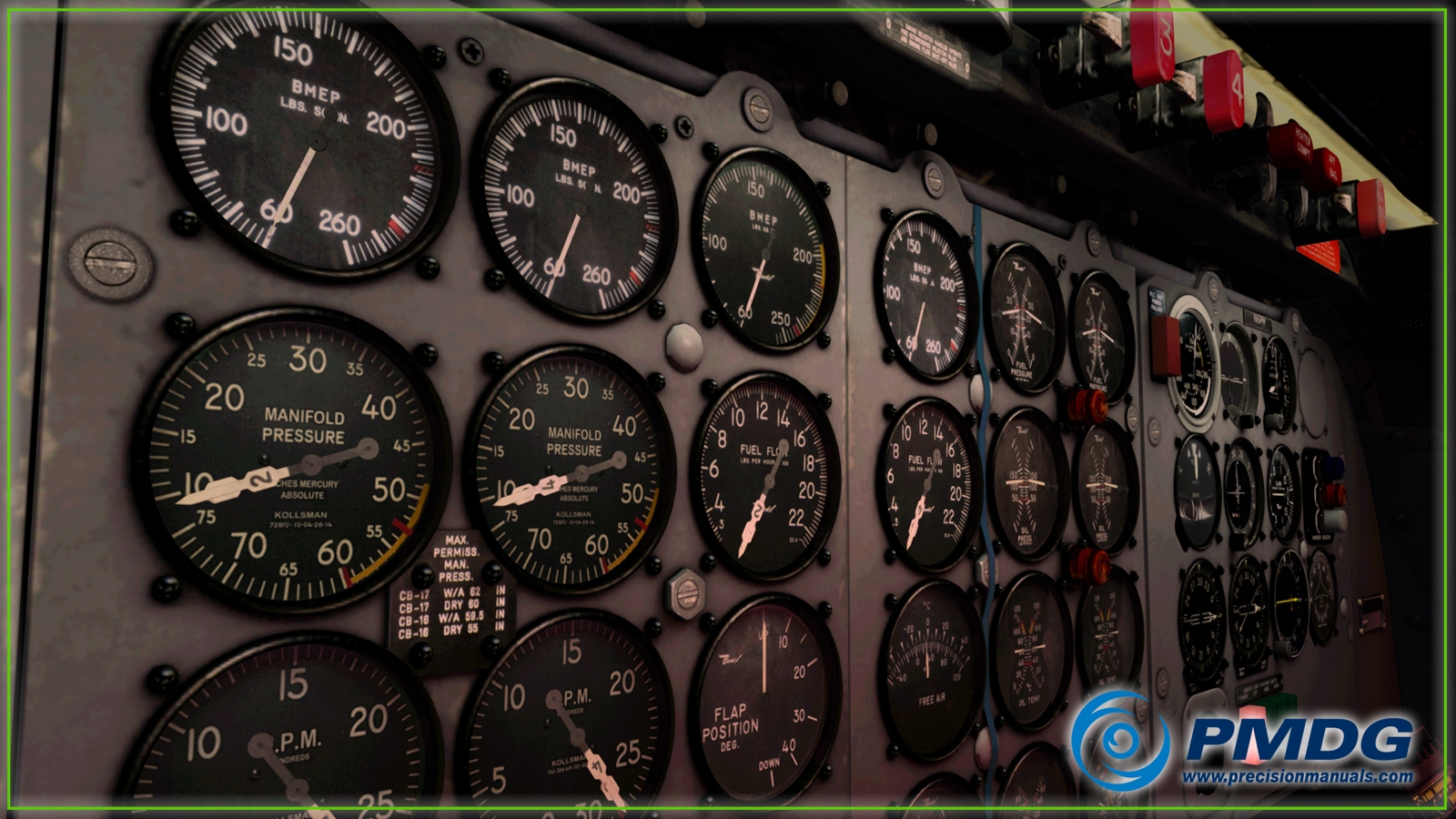 So along with some of tonight’s visual display, some things you will notice and appreciate in the design of this simulation:

Automatic Flight Engineer, or AFE as we call him.  “Back in the Day” it wasn’t often the pilots that managed the complex processes of the airplane’s systems and engines.  That was the job of the Flight Engineer.  Recognizing that many modern simmers really don’t know much about a 1950s era airliner, we have coded an entire flight engineer behavior suite that will give you that kind of support, allowing you to start your learning by focusing on the process of flying the airplane without having to worry about every switch and lever movement required to fly the entire airplane.  Bring up the AFE, tell him what you would like to accomplish from the context driven menu, and you will hear him reading out the checklists to crew confirmation while moving switches and knobs to their proper positions. 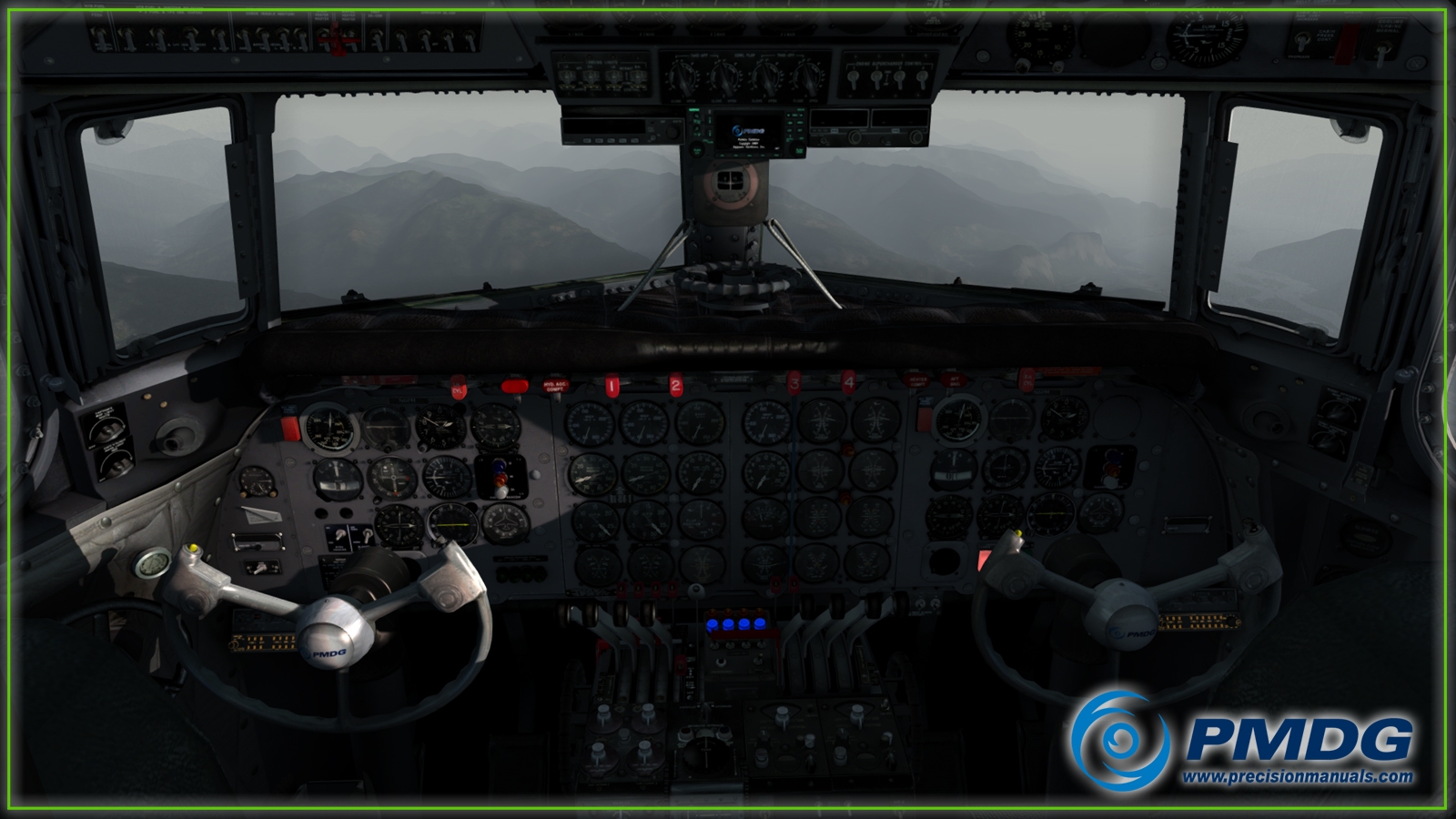 As you become more comfortable with the airplane, you can select his input for specific phases of flight, or to simplify complex tasks such as setting up the airplane for start, or you can simply take over and do all of it yourself- which will bring a whole new level of satisfaction to your simming.

To that end, we have also thought to include a ton of customization options as well.  The DC-6 comes complete with pre-configured setups to make it compatible with your Flight1 GTN650 or GNS430,  RealityXP GNS430, and it comes with it’s own Garmin unit just like the airplane we used as the baseline for this simulation…  We figured you might want some of those tools to use onboard if you already own them, so that you can concentrate on learning how to handle the airplane.  (You can also navigate old-school if, like me, you are into that sort of thing- believe it or not, it is still legal!)

We have also provided native simulations of the GNS430, GPS400 and Bendix radios actually carried aboard NCA’s DC-6, as well as a faithfully accurate simulation of the Sperry GyroPilot.  Want to learn what a magical instrument today’s 3 axis autolanding marvels really are?  Come fly the DC-6 and master the charm of an old school, gyro driven flight controller! 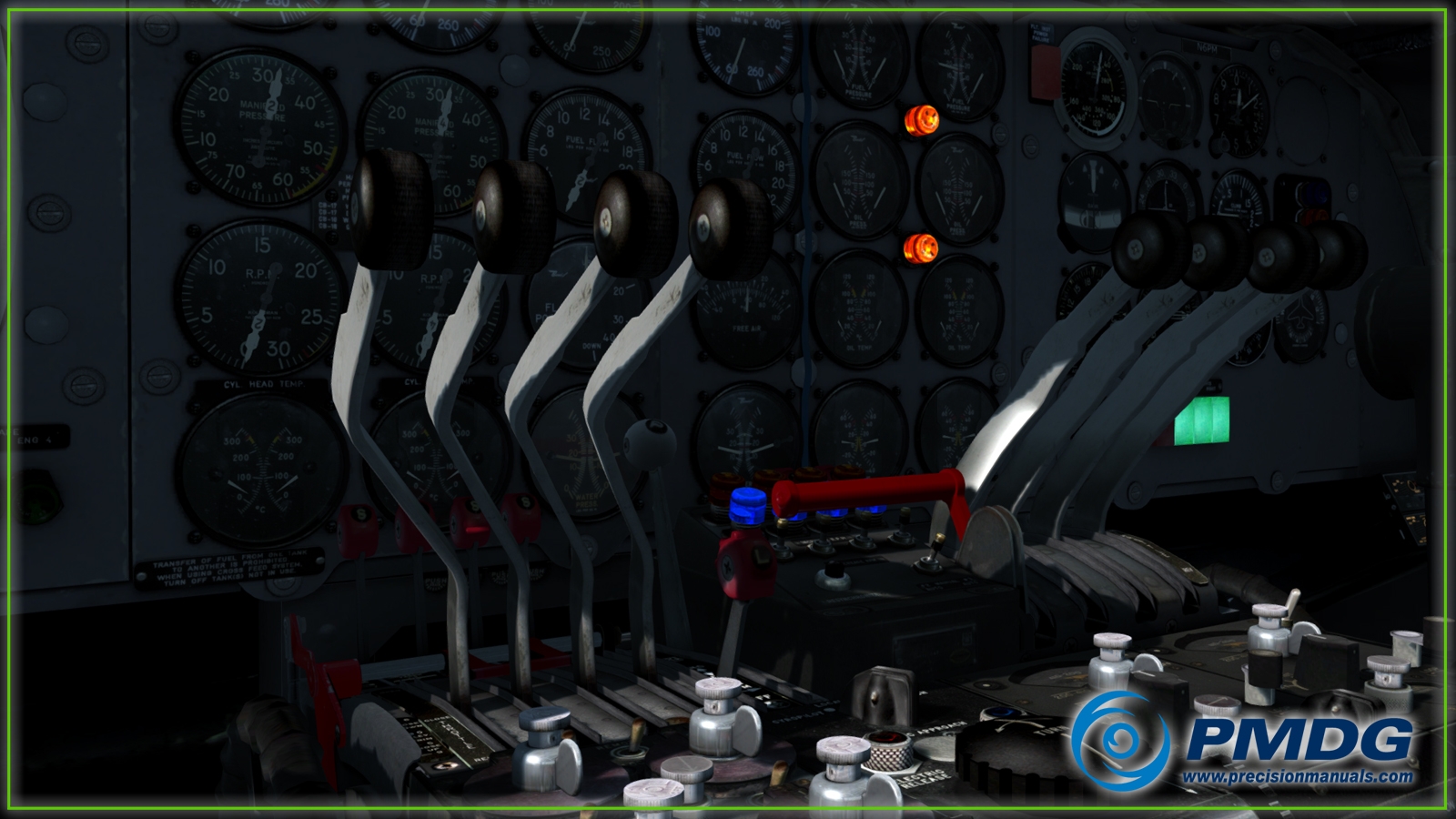 So what kinds of things do you get to fiddle with while flying a DC-6?  Lots of cool stuff!

Setting power in these old radial engines isn’t done by slapping the throttles around like you are used to doing in jets.  It requires an entirely different approach to flying that involves adjusting both RPM and Manifold Pressure in order to obtain a proper BMEP (a measure of the amount of torque created to turn the propellers.)  Don’t let the jargon scare you- once you follow through the tutorial and use the AFE a few times, you will find yourself taking huge amounts of satisfaction from constant, minute adjustments to your power settings throughout the climb, cruise and descent in order to match the performance tables and fuel flows perfectly.  There is something quixotic about using three sets of levers to control a half dozen parameters related to the health of your engines. 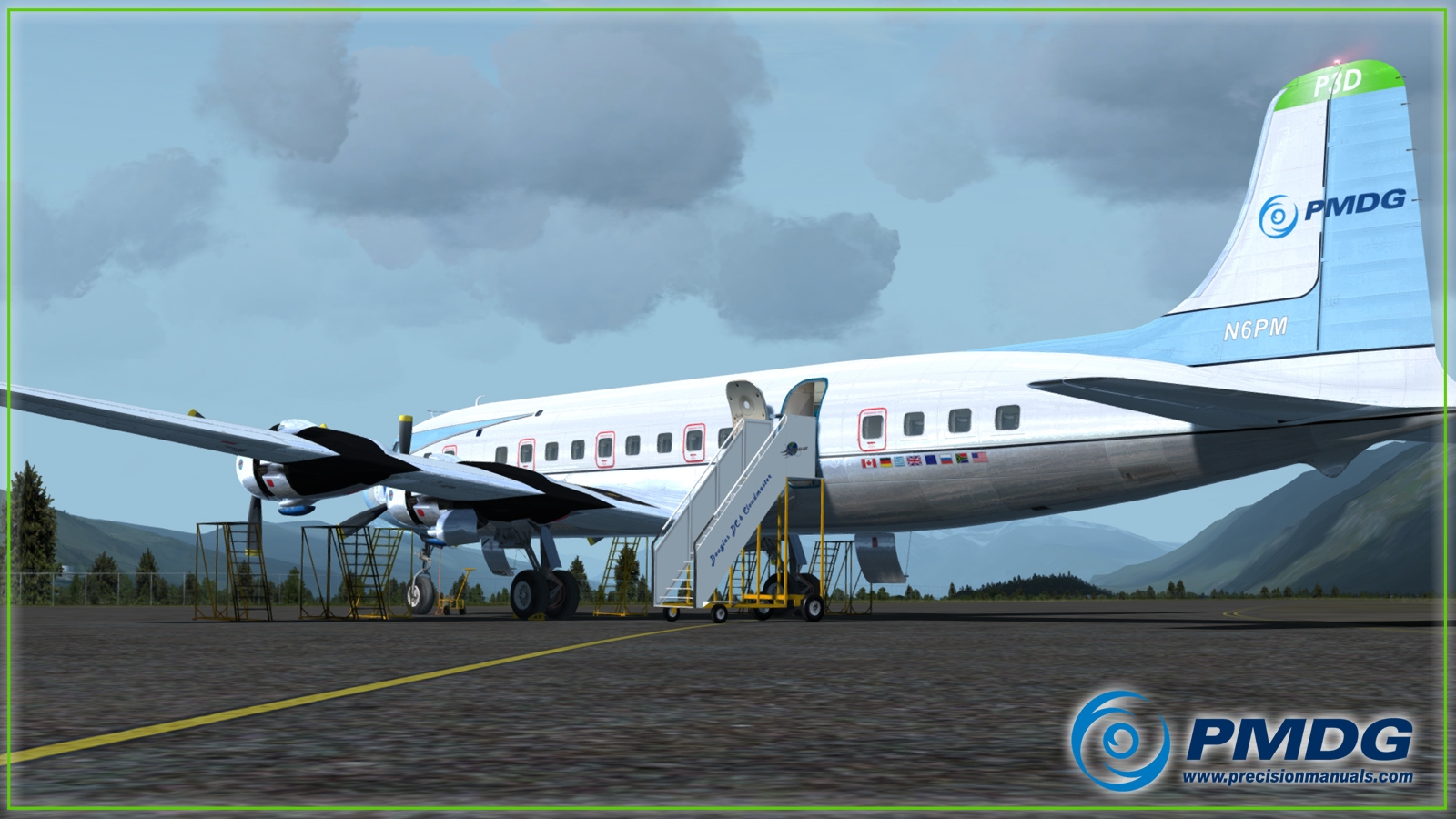 And we have given you some incredible realism inside those great, shining engine cowlings.  For example, when you first start your engines, the oil temperature is usually somewhere around ambient air temperature, which makes it thick, and highly viscous.  Any of you who have flown a piston powered airplane of any sort will recall that after starting the engine, you occasionally have to nudge the throttle backward as the engine warms, because the RPM tends to creep up over the first few minutes of engine operation- and this is even more pronounced when operating a big bore radial engine.  You will find that in order to keep the RPM at the recommended idle speed, you will be constantly tweaking the throttles aft while the oil warms and the rotation of the engine increases speed on it’s own.

Then of course, you have the other side of things…  After landing, you have nice warm toasty oil circulating throughout the inside of your engine.  If you pull the throttles to the idle stops while on the taxi in, you are going to see the oil pressure plumet due to low viscosity at higher temperatures, and that can lead to metal-on-metal contact which will prematurely wear your engines and possibly ruin a day much later in your flying…   Most likely will a full load, at night, low visibility, in mountainous terrain and icing conditions.  Because that is when engines tend to fail…   (They never fail when you are empty, near a nice beach resort, on a sunny day, when the parts department is closed, guaranteeing you an extra day to sun yourself and enjoy the surf!)

This is just the tip of the spear when it comes to the depth of simulation present in the DC-6…  and wrapped about all of it is the sheer beauty of a machine from the golden age of aviation.  We have provided you with both the DC-6A (freighter) and the DC-6B, which is the passenger variant operated for so many years by the world’s airlines.  (Trivia:  A DC-6C is actually a bass-tard <cough> designation invented someplace outside Douglas Aircraft and represents a conversion of sorts that is neither an A nor a B… gofigure.)  We have a broad range of liveries, including most of the famous designs seen around the world and even a few still flying today, such as the Flying Bulls and NCA’s DC-6 that was used as the survey airplane for this product. 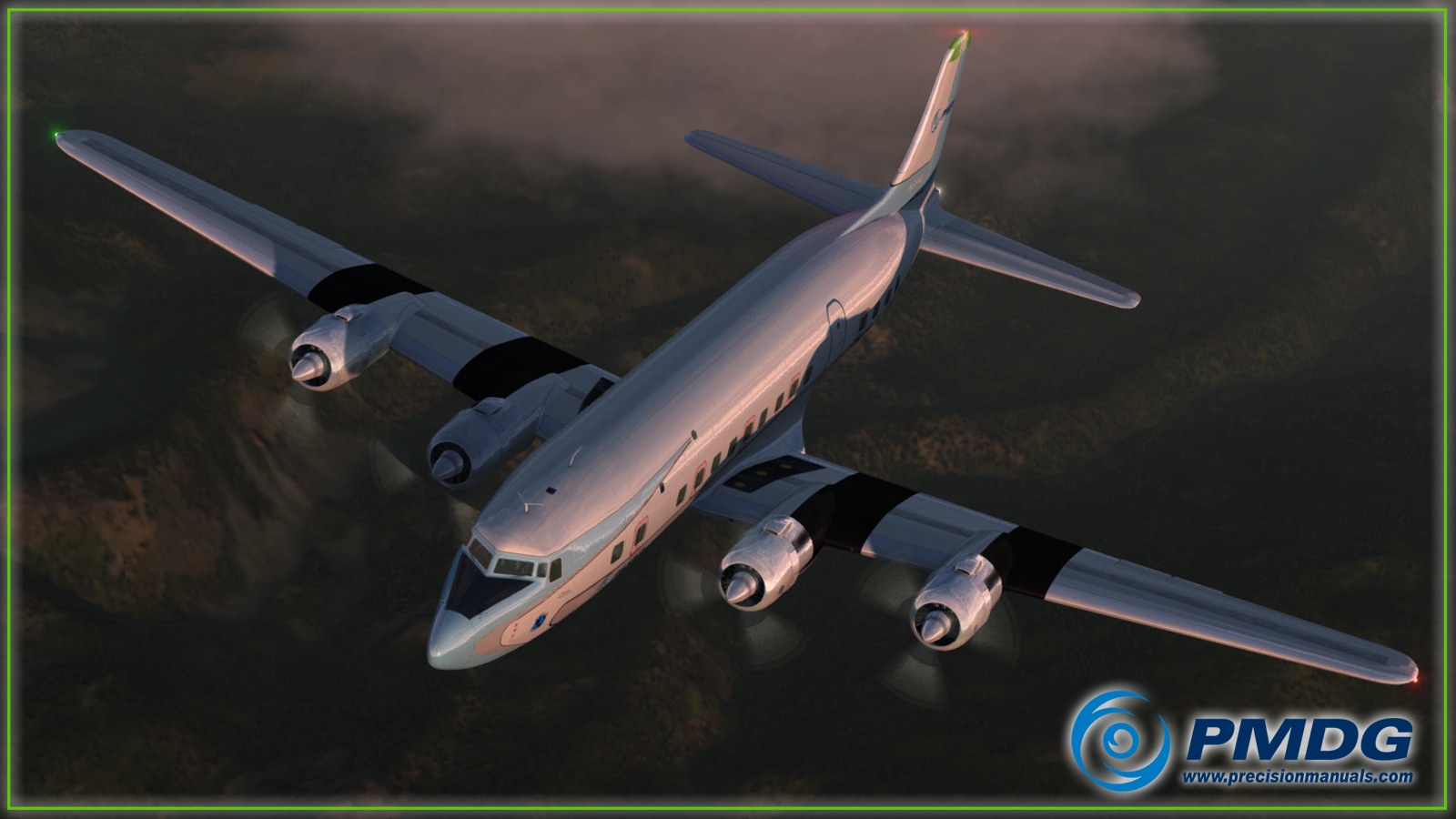 And one thing I simply cannot show you:  Sound.

As many of you know, I operate a classic propliner and big fire belching radials are near and dear to my heart.  They make a certain sound.  It is indescribable, but immediately recognizable.  Sonorous.  Resonant.  Vibrato.  Bass.  Baritone Hum.  Harmonization.  All mixed together in a magnificent symphony of tonality that can only come from radial engines in flight.  Armen has captured this PERFECTLY, then mixed it in with the natural hiss of the slipstream slicing past the hard edges of the cockpit windows and individual recordings of every switch, knob, lever and dial recorded aboard NCA’s airplane specifically for this product.  The thrush of props going into reverse, the clanking of an engine rolling to a stop, the squeaking brakes…  The airplane is alive around you- and if you appreciate sound- you are going to LOVE the DC-6.

Oh- and one good parting shot of a DC-6 climbing out at night.  This image is from Prepar3D v4, and shows the dynamic lighting effects and of course a beautiful flame blossom from the exhaust stacks as those engines haul 100,000lbs+ of people, bags, aluminum, fuel and dreams skyward! 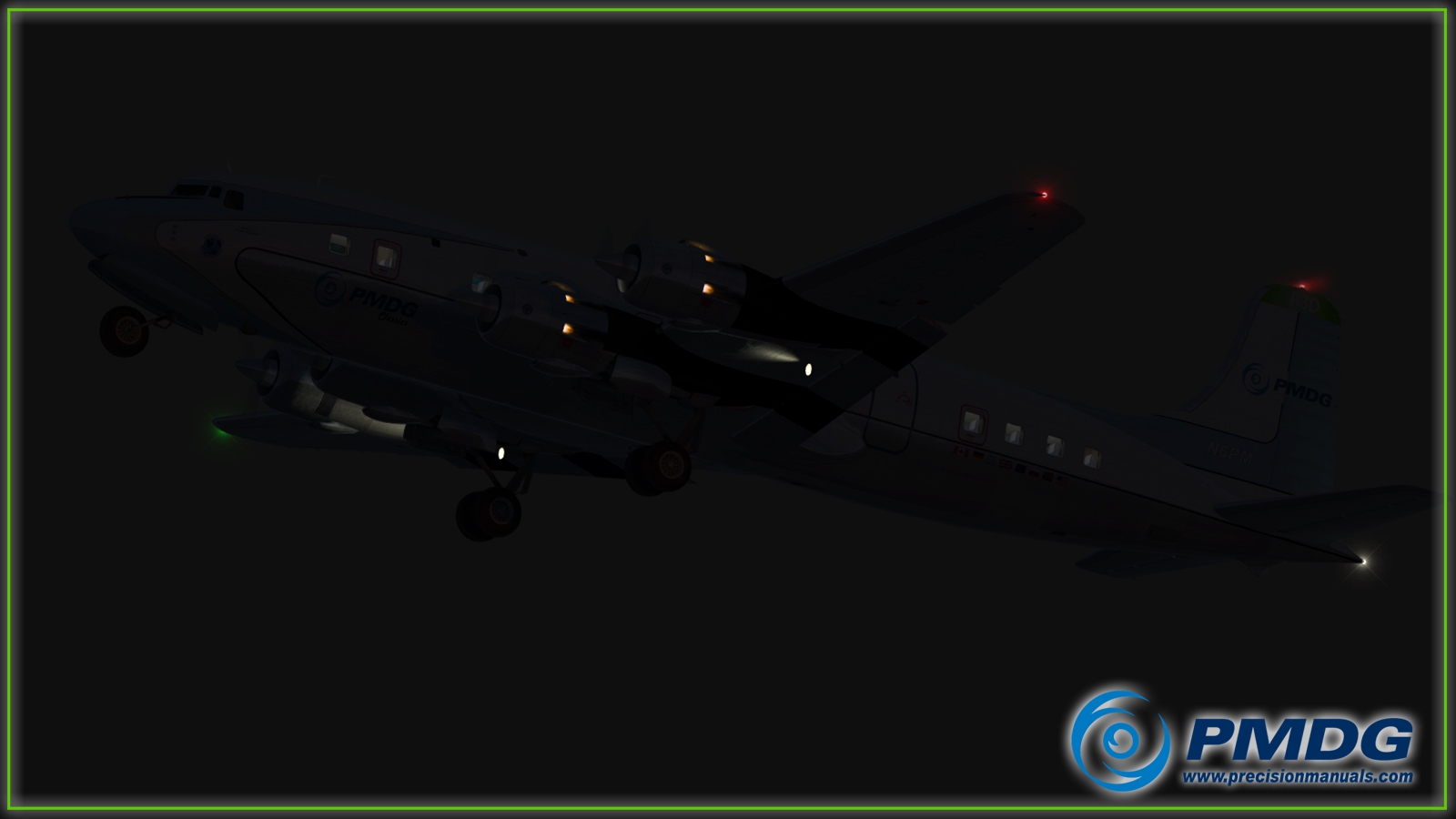 Okay- time to get some crew rest in preparation for the release…  Stand by to fall in love with a glamorous old lady-  we are certain that you will!

Günter - simFlight
Editor
Reply to  Will

Will
Reply to  Marcel