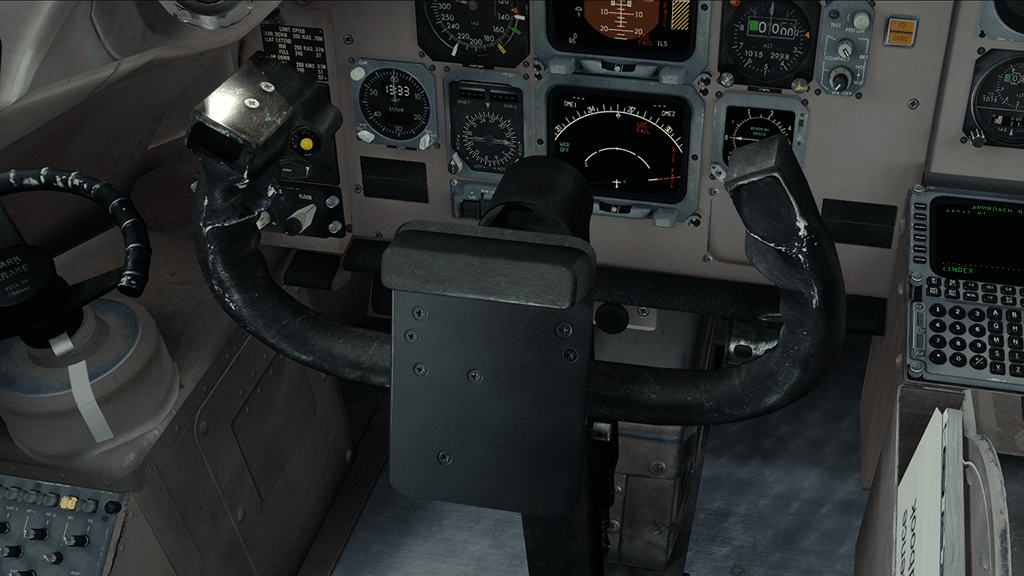 Gentlemen,
as the SP1 beta has been officially released to our testers, we would like to take this opportunity to introduce you the upcoming SP1 update and its features for the 64bit platform (P3Dv4.1 and above, a 32bit SP1 will follow after the 64bit release).

In this update we decided to focus on the improvement of the visual rendering, enhancing the “playability” and the clearness for a better ease of use, rethinking the whole structure in order to lay the basis for future features, and continuing to develop the aircraft systems.
In doing all this we really valued your feedback and we believe we satisfied most of your requests.

The whole cockpit has gone through an in-depth restyle. Every inch of the textures have been checked and remapped where necessary, all errors have been corrected, fonts improved, using references from the real panels. A lot of photo-real sources have been used to take care of the smallest details.
We have added the blue and gray background colors and we also gave each variant its own character in terms of wearing, with the blue version being the “oldest” and the grey one the better taken care of.
Light textures and effects have also being improved: different panels now have different backlight tone, annunciation lights that are on most of the time, are more faded and worn than others, position of the spotlights have been corrected. Annunciation lights now have a working dim position.

We also added customizable placards which will allow painters to personalize the yoke checklist, registration placards and notes.
All of this really gives a much more realistic feel to the eye and a lot more character to each aircraft.

In the 64bit version both the Virtual Cockpit and external models have been updated.
Several switches and knobs have been fixed, remodeled, repositioned focusing once again on the smallest details.
The transponder upgrade to the Gables G7490 ADS equipped is one of the biggest visual changes, together with the amazing animation of the sun visors. Other animations (e.g. gear lever, window frames) have been fixed.
We also improved on the customizability by adding the no auto-brake variant (airline option in load manager).
In the external model we fixed all the reported issues. Wing flex has been increased, although we have faced some challenges due to the original design of the wings.
It might not be as much as you would like to see, but we will first get your feedback and opinion before having to tear the whole wings apart.
Chocks as well as different air conditioning/air starter carts have been added.

The load manager has been updated to address most of your requests.
A big change in the whole structure was necessary in order for you to now be able to customize, load and save each individual airframe.
We also laid the foundation of what will be one of our main focus for the future: the life and progress of each individual airframe and its maintenance aspects.

In the cockpit we also adjusted the click-spots in order to make it a bit more user friendly, and added some new ones (e.g. hide/show yokes).

Some errors on systems logic and their interactions were corrected, while most of the new features involves the engine behavior.
With wear and age engines will build asymmetries, thrust levers asymmetry, and asymmetric spool ups just like the real ones.

Other than the cockpit lights update we added new effects for St. Elmo’s fire on the windshields, tailpipe fire during abnormal engine start, brake smoke effect for hot brakes and smoke effects on the external power vehicles.

Each aircraft will start “aging” differently, fluids will be consumed, engines will build up discrepancies as their life hours increase, light bulbs will occasionally burn, repetitive snags could occur on the same aircraft and of course you are responsible to perform the necessary maintenance tasks and periodic checks.

This will be just the foundation of a complex random/maintenance based failures we want to develop further in time.

When failures are dispatchable by MEL you can opt to either fix them or fly with them involving the risk of facing more serious failures in flight.
The Technical Log page will notify you upon reaching the expiry date of MEL and/or maintenance checks.

Furthermore the SP1 includes a „turnaround mode“ which will allow you to find the aircraft the same way you left it when you close the simulator.

For those of you eagerly waiting for the Shared Cockpit function we want to reassure you that it is still in the plans and possibly one of the next project in line.
As previously announced after stabilizing the FSX version with a dedicated Service Pack for the 32bit platforms, we will focus on the single P3D 64bit environment development.
We believe we can only continue to improve on a live platform which grows and expands, rather than try to fix groundbreaking new features on an old platform that simply does not support them.
We truly believe the transition is worth, and we want to encourage it by continue offering the upgrade for just the price difference between them.

We trust you will enjoy this update as much as we enjoyed making it, and we hope you will value the huge amount of time we invested in it.

Looking forward to give you more great news in the future.
The Fly the Maddog X development team.